Eight ancient and eccentric wizards locked away their favorite spells and a tiny part of their souls inside eight dusty volumes, and hid them away, safe from grasping hands. But not well enough apparently! Now you have their power for your own, but don't expect it to be easy to wield!

What games are these for?
The spells make some assumptions about Levels and Hit Points, so if your game has those, these will probably work as written. In games without levels, just read L as 1, or maybe increase L by making some kind of preparation (Spend 1000g on components. Travel to a site of ancient power. Find the robe of the wizard who wrote the book)

How do I use these?
Start with the card Petty Spells side face up. As an action, you may cast one of the spells shown, then flip the card to the Overdriven Spell side - Using the spellbook fills it with crackling energy, you'll need to do something drastic to disperse it. Casting the Overdriven spell will flip the card back over, but will also deal you 1d6 HP damage as the energy rips through you. The spellbook's energy will also fade after a night's rest

How do I put these in my campaign?
Just use these books as magic items! Anyone can use them. Maybe L=1 when non-casters use them, but maybe not? Maybe they're a wand or a magic sword, or a demon or something, rather than a book?

OR Ignore your usual magic rules. Magic users get one of these at character generation, and maybe a bigger hit die than usual. Maybe they can pick a new one of these every three levels, or they have to go on a quest for them

OR They're just a normal spellbook that magic users can copy spells out of. Petty spells are level 1, Overdriven spells are level 3 (including the HP cost). Ignore the whole card-flipping thing

OR However you want, I'm not your mom!

How do I craft these?
Print front and back on a sheet of cover stock - alternatively, print on two full sheet labels and attach them to both sides of the cover stock - and cut using the corner guides. Trim with a corner punch for snug mint tin storage

I've included the Affinity Publisher file for those wishing to make their own spellbooks in the same style. If you do so, please share! 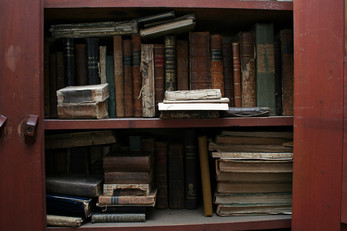