This is just a little one-level puzzlebox. I'm not sure if there's much more I could do with it, but I'm content with it being small.

This was inspired by G.P. Lackey's contribution to the 2019 Famicase exhibition.

Press M and V to disable the Music and audio Volume respectively.

short but perfect. the controls seem a little floaty at times and a way to know which character is sellected would be nice but i still finished it and had a blast. Great game with a perfect difficult level

Short and sweet! Nice little brain teaser. I like how the music varies for every character.

Reply
The GDWC3 years ago

Really fun little game! I liked that you sometimes even had to kill some of the characters to be able to move forward. All characters had their own important part in this and I really enjoyed playing it. One thing that gave me a bit of a headache was the way the camera moved when you swapped character. It wasn't that bad when they were close to each other but when they were further apart it made me dizzy, I do get motion sickness quite easy though so it might just be me.

Other than that I really enjoyed the game and would love to play more levels :D

I don't know if you've heard of Game Development World Championship before (gdwc2019) but it's a competition for indie game developers where they can submit their games and it's free! It's great if you want some more visibility for the game and it only takes a couple of minutes to join :)

Thanks for that note, I'll see what I can do to make snap transitions an option.

I've looked into the GDWC before, maybe I'll give it a try again.

You need to use the big guy to stop the lasers.

Great lil puzzle game, with an interesting atmosphere. I have to agree with gamesdisk though-- the short music loop wore out its welcome fairly quickly. If you're interested in working with someone else for sounds and music, feel free to drop me a line in the future.

Honestly most of the music in my games could use a revision. I will be in touch.

Man, if there is one thing I say over and over to almost everyone on itch, add sound to your games. You had sound, but it was a monkey paw wish. Please, make your music loop longer. I had to mute the game because it was driving me nuts.

That being said, the other sfx where really nice, the animation on the players was simple and clean. And they all felt different to play, it looks nice and is a good display of concept. This should be developed more giving each of the players a wider role to play.

I took another pass at the music, I made it a little bit dynamic, so hopefully it won't get too repetitive.

Thanks for playing regardless!

I know I went heavy on the music on the feedback but the rest of the game was really good.

I just wish the characters can interact with each other, rather than them being a universal response to a single obstacle.

I need to add though, it is quite fun having to think about whether i can get up with a particular character or i have to find ways to kill it

Edit: i reached the top. It is indeed a fun little puzzle

Thanks for your feedback, I'm glad you got to the end.

The original plan was that the big character could throw the other ones, however I started the game too late and had to do something simpler.

Visuals are great !
The game concept is smart but very fustrating for me... good for superplayer i guess^^

Thank you, let me know if you have any specific questions. 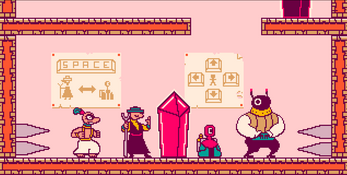 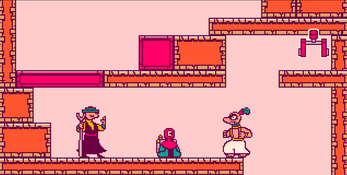 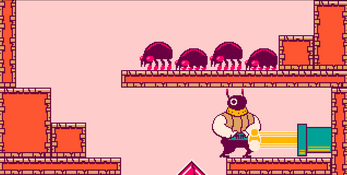